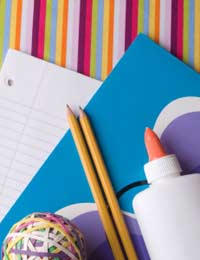 Integrating craft making into ice breaker games can be a creative and interesting way for developing relationships between people and improving a group’s dynamics. Craft making involves concentration and creative ideas, which are fantastic deterrents for people entering awkward situations.

The nervousness and anxiety that people feel when meeting a group of new people can be quite debilitating and unnerving. Ice breaker games involving activities that require focus, team work and total absorption in the task can be the most effective way to break the ice and break down the barriers of a new group meeting for the first time.

A collage works really well as an ice breaker game and can bring an element of fun and laughter to a group. If possible, bring in a selection of old newspapers and magazines to the class, session or workshop – you will also need several pairs of scissors, glue and a large piece of paper depending on the size of the group.

Once everyone has arrived ask them to introduce themselves and then to work together to produce a collage of something. This will encourage the group to discuss ideas for the collage. Once they have made a decision ask provide them with the scissors, glue and paper and explain that they must work together to create their idea out of pictures and images from the newspapers and magazines. This is a great way for the group to bind and work well.

The creative writing ice breaker game can be an effective way to get peoples imagination and relieve anxiety. After everyone has introduced themselves hand out a piece of paper and pens and explain that you would like each member of the group to write down a creative sentence. Once everyone has written their sentence ask them to hand back the pieces of paper. Then read out each sentence as a continuous story. You can ask the group if they want to be named for their sentence or you could get the group to guess who wrote which sentence.

Painting is one of the best craft activities and can encourage people to really express themselves. Painting will also allow the group glance into the lives and minds of other in the group. For example one person might paint a picture of their children and this might be seen by another member of the group who may have the same amount of children etc. Most people will paint something that means a lot to them, for example a hobby, family member or interest, which can bring interest from others in the group.

This ice breaker game will require paints, a glass of water, paper – either A3 or A4 and painting aprons if possible. When everyone arrives, make sure they are sitting in an inward circle so everyone can see what each other is painting. This will encourage discussion and interest in each other. Try and make it so the group can easily move around the room to view and comment on each other’s paintings. Once the group have finished painting ask them to elaborate a little on what they have painted.